About the Watton and Swaffham Times

The Thetford and Brandon Times and its sister paper the Watton and Swaffham Times emerged from an old Breckland favourite - the much loved Thetford and Watton Times.

In 2005 the Thetford area's favourite weekly newspaper celebrated its 125th anniversary with a special "wrap-round" supplement depicting front pages tracing the evolution of the paper.

In it long-serving fomer chief reporter John Kitson recalled more than 25 years reporting the local news including stories of big forest fires, major town developments and the onset of Thetford as a designated London overspill town.

The first weekly to hit the Thetford streets in 1880 cost just one penny and was available to an increasingly literate local population. Remember there was no television, so reading was a major pastime and the local paper was the only way information and news was spread around town.

Now the Thetford and Brandon Times and its sister paper the Watton and Swaffham Times are distributed free to more than 25,000 homes, principally in the four towns in their titles but also to larger villages such as Mundford, East Harling, Weeting, Saham Toney and Ashill as well as to one of Britain's largest airbases, RAF Marham.

The Times has a community reporter, Sandie Ridgley, who takes photographs and keeps up a flow of news for the paper.

A selection of our magazine titles can be found below. Click the magazines to find out more.

Coronavirus ‘R’ figures for East of England edges closer to 1 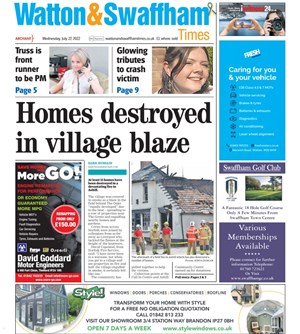